The Trade plus Aid Biogas Alternative Energy programme, is a climate change initiative aimed at harnessing sustainable energy alternatives, through the treatment of animal waste in controlled anaerobic conditions.

The business as usual approach for South Africa’s Manure Waste Management Systems in most Farming Industries are non-permeable open-air anaerobic lagoons, where all Greenhouse Gases (GHG) are emitted uncontrolled directly into the atmosphere. These current practices of treating waste in non-permeable open-air anaerobic lagoons are is accordance with local legislation of all South African provinces.

Improving on this current business as usual model employed across South Africa, the Bio Digester Programme makes use of the more viable and environmentally friendly technology of closed anaerobic lagoons, which are in line with climate change initiatives.

The business as usual approach is to have rearing barns and milking parlours built on a “flush toilet system” where the animals are housed on slated or grid flooring. The animal waste is then captured in the channels below and flushed using bulk volumes of water directly into an open air lagoon.

The initial stage of an Agricultural biogas project is to substitute the business as usual approach of flushing directly into an open-air anaerobic lagoon by creating a new covered anaerobic lagoon, followed by the installation of a bio digester and gas to electricity equipment to treat barn flushed effluent produced from the rearing barns and milking parlours for the generation of renewable energy.

Anaerobic digestion can be simplified as the following:
Phase 1 – Hydrolysis: In this stage, bacteria release extra cellular enzymes that promote the compound’s hydrolysis, generating small soluble molecules such as organic volatile acids. The products of this stage are the substrate for bacteria in the next step.
Phase 2 – Acidogenesis: The decomposed matter from the previous step is converted into organic acids. Other substances are formed: salts, carbon dioxide, water and ammonia.
Phase 3 – Methnogenesis: Methanogenic bacteria are use hydrogen and carbon dioxide and transform it into methane, producing biogas.

The covered anaerobic lagoon bio digester system is comprised of a synthetic geomembrane cover, and is fixed on the perimeter by an anchorage system. The geomembrane is a product widely used for the lining of municipal and agricultural waste management systems and is highly resistant to ultra-violet radiations, ozone and chemical compounds.

The methane rich biogas produced by fermentation in the biogas digester is captured and is pumped to the gas treatment plant where it is prepared as a fuel for the micro turbines by removing excess condensate and compressing the gas to a pressure that is acceptable for the turbine to operate.

The effluent discharged after being processed in the biogas digester it is free from the volatile solubles that could cause harmful Greenhouse gases when reacting with the bacteria in the open air anaerobic lagoon, and is now nutrient rich usable water for farming processes. 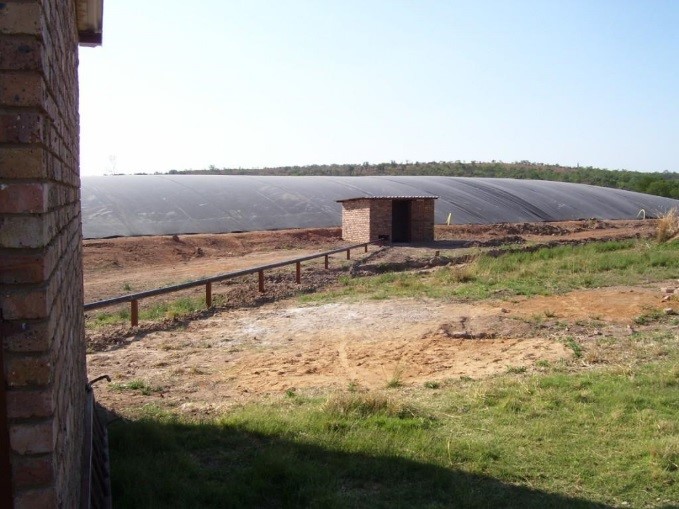 Biogas digesters as an agricultural input resource: The effluent from a biogas digester, which is almost entirely liquid in content, is very rich in the nutrients required for plants to grow, including nitrates, phosphorus and potassium for use on domestic gardens or for sale as organic fertiliser.
Deceleration of Global Warming through the reduction in the emissions of methane gas. The methane gas which was being emitted from the settling ponds are virtually eliminated.

Water Environment: There is a reduction of surface and ground water pollution from the existing settling ponds.

Reduction in odour from the release of hydrogen sulphide, ammonia and volatile organics from the settling ponds has been reduced.

Reduced demand and reliance on the electricity grid: which is fossil fuel derived and non-renewable source of energy. This results in a significant reduction of greenhouse gases upstream of the project activity.